First, we are safe in Madeira.
We will time our passage to Portugal next week such that we are safely behind in terms of wind and waves.
I feel sorry for the Azores and the loss of the tugboat ‘Bourbon Rhodes’ in the storm.

What is that?
First time sine we left France in March it’s raining. We had 6 months without any rain! 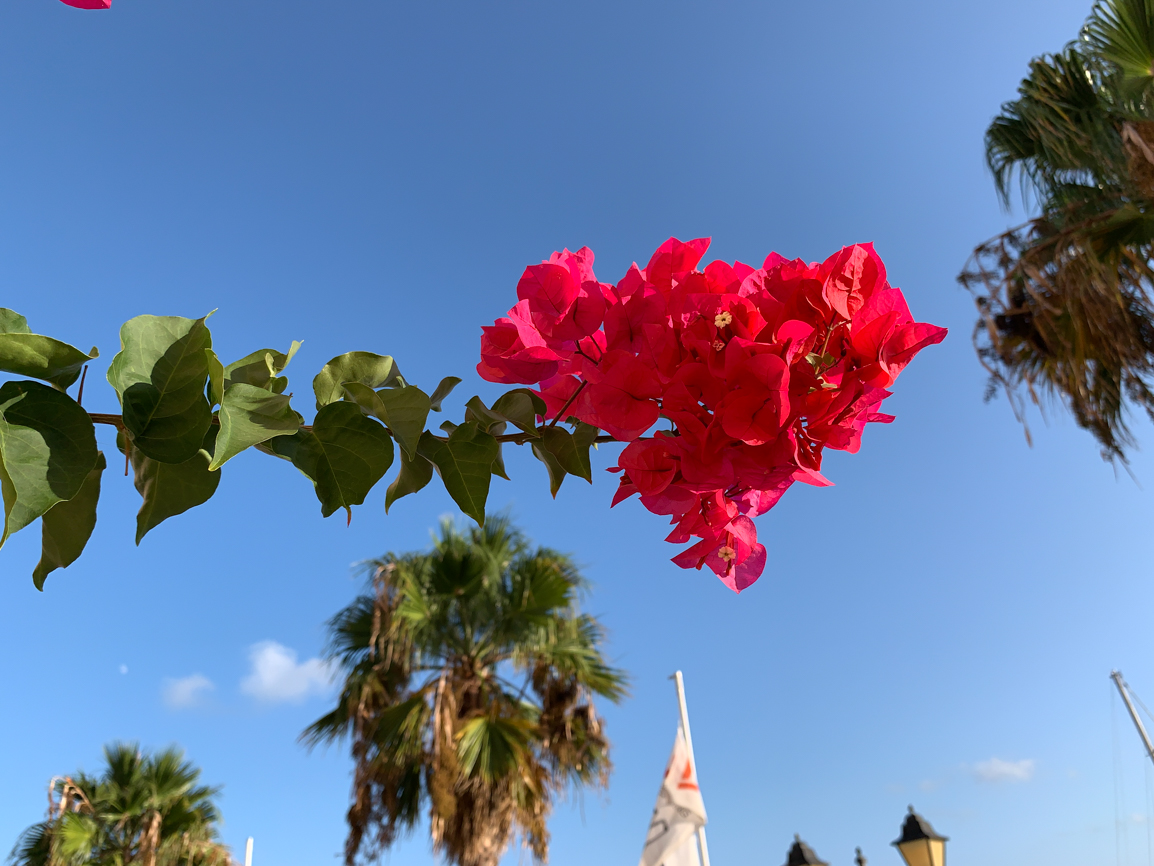 Last Saturday, September 7, we arrived safely in Madeira. We docked in the beautiful Quinta do Lorde Marina on the eastern side of the island.

The sail from Lanzarote to Madeira is on a NNW (North North West) heading for about 320nm. Prevailing winds are from the North East with waves coming from the North (mostly North Atlantic swell). Wind-wise the trip was great, wave-wise horrible. We sailed upwind all the time and from day 2 on were slamming into the waves. At a 8 seconds wave period (at best) and 2 -3m wave height it was a constant roller coaster.
8 second wave periods equal 450 waves per hour and maybe 5 or 10% of them are formed such that the boat’s bow lands hard when falling into the trough of the next wave. That’s about every 1.5 minutes. You are constantly prepared, I mean waiting for the next slam. Life onboard becomes a workout like in a gym.
You cannot walk, drink coffee, push a button on the chart plotter or do anything else without grabbing a hold or jamming yourself safely between something or sit down. The steering stands are wet. Especially on the lee-side hull, salty spray streams from the bow mixed in with some extra buckets of Atlantic water when the boat hits a bigger wave. Getting up on the forward deck always requires hooking into one of the safety lines and wearing foul weather gear.

Microwaved food is the maximum culinary delight you get in this weather. We prepare special food before we leave. ‘Special’ is such food that still tastes good even when coming lukewarm out of the microwave. Spaghetti with tomato sauce with some meat added or hard boiled eggs are ‘special’. We always make an effort to be well nutritioned and have energy reserves.

Slamming into the waves means a lot of stress for man and material. We had the main sail traveller breaking and after that cold not use this sail anymore. Thank God it happened towards the end of our trip. Twice on this journey we hove-to to fix things. Heaving-to in 2 – 3 meter waves actually worked very well for us. As soon as the boat is not moving forward everything becomes calm and stable. Good for working on the mainsheet system. We will install a bigger traveller system to add working load capacity. Nautitech seems to have undersized the Lewmar traveller cars. Lewmar’s recommendation for the size #2 traveller car, as they are installed on our boat, is to use them for main sails of up to 46sqm size, while we have a 72sqm main sail! In addition, catamarans generate higher dynamic loads on the main sail sheet compared to monohulls. So, they are clearly too weak from my perspective and experience.

Short before night fall on day 1, the Admiral noticed a little bird following us, flying low over the water barely making progress towards us. We slowed down the boat so he/she could catch up.

He soon moved into our main cabin and stayed in a remote corner overnight. We offered water and a variety of food but think he consumed nothing. A land bird 50nm away from the next tiny island ‘Selvagem Grande’ and 150nm from any other land appeared very unusual to us. We later learned that it was a Garden Warbler and some of his Canadian siblings fly distances of 1500nm over open water, nonstop obviously. Next morning the bird briefly entertained the Admiral by sitting on her shoulder. At first sunlight our visitor left.

I think many people, including me, dream of visiting extremely remote islands. As a first thought the Pacific always comes to our mind as the prime location for little islands. It never occurred to me that the Atlantic has many of these little surprise locations too. ‘Salvagem Grande’ lay 50nm to the west from our course and i would have loved to go there. However, in order to visit Salvagem we would have needed pretty calm weather and a special permit from Portuguese authorities to visit this nature preserve.

Remy, our intrepid navigator tries to will us there.

Later, I found a very well written blog by a fellow cruiser who actually sailed there in 2017: Salvagem Grande

Short before sunset we passed a threatening looking squall line on its eastern side but did not encounter any strong winds. The squall line had several fair weather water spouts. I have no experience with water spouts but since they look like tornadoes at their incipient stage I have a lot of respect for them and prefer to be far away.

Not more than 45 minutes later we encountered nice weather again.

On the third day 50% of the crew felt really miserable. I was a bit exhausted from long watches and pretty strenuous deck work. Luckily, ship traffic is very sparse en route from the Canaries to Madeira. We have a device onboard called Echomax, which receives radar signals from other vessels and sends them back amplified. The Echomax did not pick-up any radar signals around us for more than 24 hours, even not a far away land radar. Same for the AIS which showed no signals for an even longer time. At maximum range we often see a freighter’s AIS signal 50 miles away on our chart plotter. In this area – nothing. We were truly alone out there. So we kept a relaxed watch cycle requiring a 360º visual scan and sail check 10 times per hour or every 6 minutes during the night. That gives you a little rest in-between and allows to stretch your awake time way beyond the normal 4 hour watch cycle we typically use.

After a long watch the next morning comes and rewards you with a sunrise like this :

Short before dark, on day 3, we arrived in the Quinta do Lorde Marina in Madeira. The approach into the marina looked more narrow than I expected it from the charts and handbook. The fuel dock was non existent. We often go directly to the fuel dock at port entrance as a safe first choice, not because we need fuel. Normally, it’s easy to get there, tie up your boat and figure things out. But a storm some years ago destroyed a lot here including the fuel dock.

The marina entrance had strong gusts pushing us around about every 50 meters as we went further into the marina. The gusts shifted in direction by 180º or so. High cliffs surround the bay in which this marina is built. Catabatic winds fall down this cliff in some spots creating this unusual wind situation. Before entering we had tried to call the marina on VHF radio to get docking instructions without success. Regardless, on the entrance wall was the marinero trying to direct us, but he was very hard to understand in the wind. We simply continued to a space down in the marina where we saw a T-dock with enough maneuvering area to turn the boat if needed. Here, the marinero pointed us to one jetty further down where we nicely docked parallel to it. As so often, when you come into a marina, many of the fellow cruisers were ready on the dock to help us taking the lines. It’s always such a nice gesture and welcome. We checked in at the marina office and saved the formality part for the next work day. After 65 hours being underway we were dog tired but still hungry. We went to the local Captain’s bar, had a wine and a burger. We slept really well and long into the next morning.

Next day was deck cleaning time.

We found this little fellow on the side of one steering stand, sadly too late to help him.

With appreciation, we often feel like ‘we have arrived’. Madeira, like the Canaries, is one of these magnificent spots where one simply feels good.

Small church in the marina. I personally prefer this simplicity in church architecture over opulence.

View from our first short hike to the north side of the island.

In the coming days we want to tour and discover the island. But right now, we are repairing (again). We partially disassembled the main sail sheeting system and traveller in order to find out how to add strength and order the right parts.
Main sheet traveller system

Speaking of ordering parts while on an island. Madeira is an island 600 miles away from Europe in the Atlantic. While fellow cruisers know what I am talking about, others might imagine ordering parts works like Amazon Prime in the US. Hmmm, not.

Most technical parts require very specific information in order to get the right stuff. That means you talk and email a lot with the technical support from the device manufacturers. Then you order from a supplier. Then you have to find the right shipping company. Try to ship by plane a 3 meter main sheet track (10ft). And then, depending on where you are, customs. For example on the Canaries goods could easily get stuck in customs for weeks.

We will handle it all, but more time is spent on things like that, than we ever envisioned.

Speaking of repairs. How did we spend our summer?
Aside from having our grandson for many weeks onboard, which was true fun and joy, we had to work on the boat. Here is a sample gallery of our summer projects for you to click through: 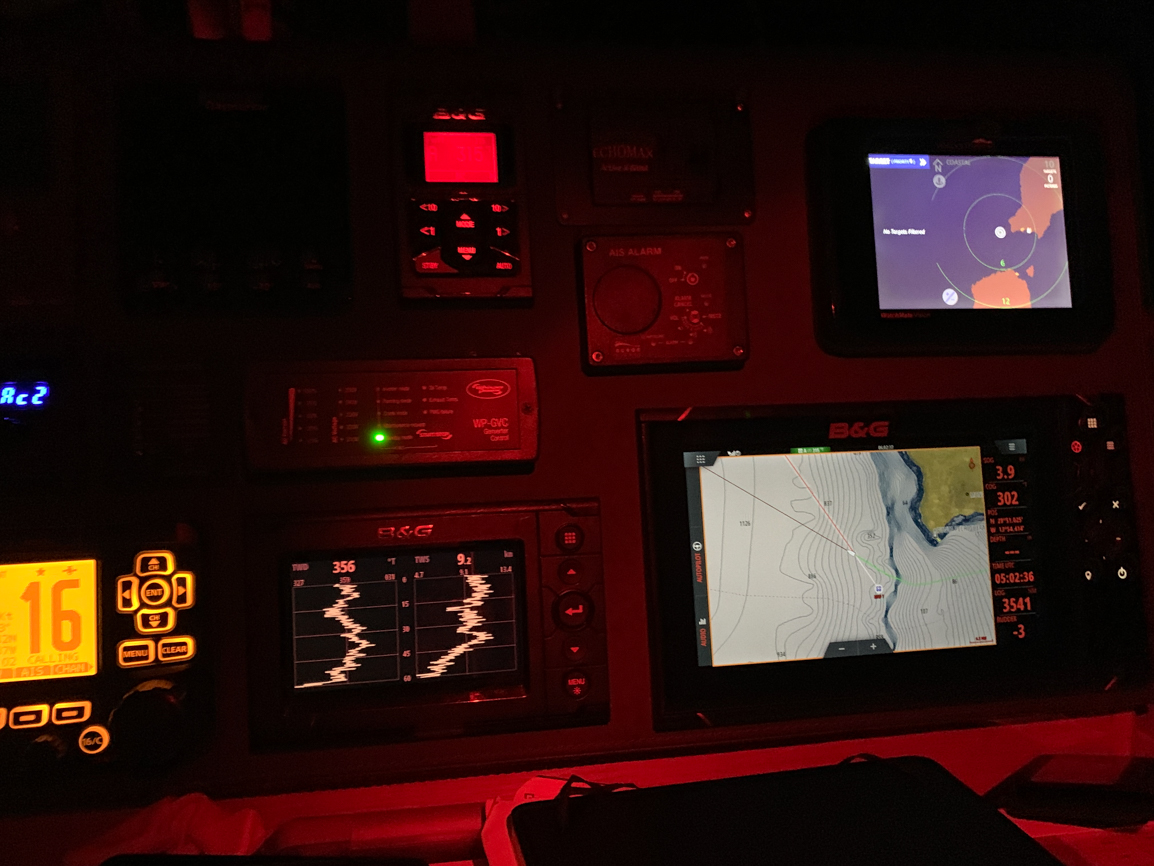 Sorry, we had a long hiatus from blogging. We had family and many friends onboard plus the ongoing “technical difficulties” – like always.

We left 04:30 Lanzarote this morning and are heading to Madeira. We hopefully arrive in 3 days. It is a 300nm stretch and winds are not 100% in our favor. However, they are on the low side of our usual sailing, being forecasted to be between 5 and 15 kts. A clear plus not to have a rough sail where the ceilings drop down in the boat 🙁

I will write more about the past months while underway, as many interesting things happened. I’ll close this entry right now as we sailing away from shore and the internet will be gone quickly and then I can’t upload my blog entry anymore.