Sailing to the Bahamas – November 2022

From Cape Charles to Eleuthera.

Passages on Lunara always begin with ‘Day 0’, the day before leaving. Day 0 means a lot of work and stress. Most of the time ‘Day 0’ is many days of work and waiting for the right weather window. Our initial plan was to sail to Antigua with a stop in-between on Bermuda – our long-term dream destination. This year’s tropical storm season dragged on in the mid to South Atlantic and lasted longer with many active tropical depressions. The last one, Nicole, was heading up from Florida along the Eastern Seaboard early November. The unpredictability and possibility of tropical depressions convinced us to shorten our trip. We are sailing to the Bahamas! It’s not like we feel as losers after arriving here.

On November 11, we reviewed the weather forecast seriously and decided to leave on the 12th. Weather looked ‘doable’ but timing of where to position the boat at a certain time had to be perfect. A fast moving cold front following us meant strong northerly winds against the Gulf Stream, a combination which will generate a very unpleasant crossing and at worst a dangerous situation in the Gulf Stream. It’s not without reason that this area bears the name ‘Graveyard of the Atlantic’. “Over 5,000 ships have sunk in these waters since record-keeping began”.

Look at this link Graveyard of the Atlantic

In the past weeks, we saw many sailboats with an unknown antenna on deck. New electronics always make me curious. It’s called Starlink, a satellite-based internet service. We had heard about it before, but its rumored cost of $5000 per month was ridiculously expensive for the maritime version. What we didn’t know was that a RV (Camper-van) subscription exists which is available for $135 per month 😀. The RV version was allegedly working in coastal waters (which it does!)

We ordered it. Days later, and 15 minutes (!) after opening the package, the system was up and running. Uncomplicated like an Apple product. Download speeds of up to 150Mbps right out of the box – wow! Elon Musk created another game changer.

It’s a great addition to cruising, providing a fast and reliable internet anywhere you are. Super for updating Predictwind’s weather forecasts. Over the old Iridium Satellite system, this could take hours. The only drawback is, we are not untethered anymore; not really off the grid. We’ll see how this thinking evolves.

Further prepping for long distance sailing we hauled out in September. LUNARA was on land at Severn in Hayes VA. Work was okay but there were some issues with the work, with which we are not so happy about. This southern area of the Chesapeake is a wonderfully quiet countryside with marshes. And, if you desire some action you could go to Newport News or Norfolk and you are in a busy city in a short time.

Electrical trouble – again. Honestly, on this subject can’t be much left to do onboard Lunara. Four of our 90Ah Lithium batteries died. They had become completely unbalanced between their cells and the BMS (Battery Management System) refused to switch them on for usage with the inverter or 12V DC bus. During the installation in La Rochelle in France, there was a low of 9V shown in the voltage history. The lithium (LifePo4) batteries should have lasted easily 10 years. The lesson learnt is that a low voltage, under 2.25V per cell, might not kill the battery right away, but definitely shortens its life cycle dramatically.

We added four new 200Ah Victron Lithium batteries for a total capacity of 1160Ah. That should be more than enough. This required rebuilding a new battery rack, as the old batteries had a different form factor. We got a hydraulic crimper to squeeze on the large terminals onto the cable ends. The Admiral and I have become pretty good with electrical stuff, thanks to “YouTube University” and lots of practical experience.

Coming back to leaving Cape Charles. We prepare to leave at 04:00h in the morning. A last weather check at 03:30h in the morning showed a narrowed weather window for crossing the Gulf Stream. As we do not want to be wreck number 5001 at Cape Hatteras, we postponed for another 24 hours.

At 09:00 we left dock with NW winds gusting 25knots blowing right onto the dock. Our boat neighbor, sailing a sister ship of Lunara, helped casting off the lines. In the gusts the boat did not want detach from the dock, but ultimately we made it. We motored through the narrow channel into the Chesapeake and set the large Genoa with no mainsail. There is one more narrow passage ahead of us, a Bridge – Tunnel – Bridge combination (Chesapeake Channel Tunnel). Hence, no mainsail until there.

Hours later we leave the Chesapeake Bay and enter the Atlantic. A large commercial vessel anchorage surprises us in nowhere with many waiting vessels.

The night, we sail along the North Carolina coast in cold choppy waters. The Admirals stomach was protesting. It was chilly. Off watch, I needed two duvets and my sleeping bag to keep warm.

We made good progress on our way to the Bahamas. The first 48 hours didn’t feel like keeping my diary up to date. A cold, wet, windy and bumpy ride. Approaching Cape Hatteras the water temperature rose gradually from 18º C to 22º, while the air stayed chilly. Went into Gulf Stream near Cape Hatteras and crossed it late afternoon. Clearly steeper waves of 2 – 3 meter (6 – 9ft) with whitecaps, but no breakers. Water temperature is now a warm 26º while the air temperature needs a while to catch up. Later-on we are back to t-shirt sailing, while hours ago we were curled up in multi-layered clothing.

We are now on a southerly heading, nearly direct to Eleuthera Island. Weather forecast is good, meaning no challenges ahead (I keep my fingers crossed).

The Autopilot heading data disappeared on Ray’s night watch around 02:40h. The autopilot uncoupled. Rebooting the system fixed it. I could not find a cause for this error. (Finger crossing did not help 😞)

Averaging 8 – 9kts all the time. Wind veered to 110º from the former northern direction. Blowing with 20- 25 knots. Sailing with a first reef in the main and a small staysail. T-shirt weather continues, even though it’s cloudy. Wind is supposed to lighten up into the night. If not, we have to put the 2nd reef into the main.

Wave action was more friendly in the morning – see breakfast photo of our friend Ray.

Now it’s bumpy again, also because we are sailing faster and more upwind into the waves.

We keep ourself busy with Lunara cosmetics – like here with some rigging work.

‘Designer’ summer is back with us. ‘Designer summer’ I call weather, if it is like you would design it, if you could: 26ºC/80ºF, blue sky, some puffy clouds and 15kts wind.

Over night we stayed with the second reef and a staysail. A leftover decision from the 20 – 25kts winds during the afternoon. We were quite slow by now, averaging 4 knots after midnight. At daybreak and watch changeover we set full mainsail and the big genoa and now sail upwind with 6.5kt again. We seem to have some current going against us with 0.4kts. According to the Predictwind ocean current model we have gone some miles too far to the east and hit a small Gulf Stream eddy.

Sunrise or sunset? What is more beautiful? I can’t decide looking at all my photos. What I do know is that on land I love sunsets, while at sea I welcome the sunrise so much more. It’s like a relief that the sun made it back – especially after a moonless night. Sometimes, at sunset ahead of windy nights, I tell her: please come back tomorrow morning. So far that wish was granted.

Weather changed to a tropical character. Otherwise moon and stars with 16kts wind. Wind is supposed to veer into a more favorable direction at daybreak. During the night we were followed by some windy rain squalls. We tried to dodge them with limited success.

Great lunch. galley boss aka the admiral tried the new air-fryer. Yes, we ‘needed’ one – so I was told. I agree now.

Last night enjoyed on my 0300 to 0700h morning watch a beautiful sunrise.

Day passed by sailing upwind all the time in 15kts wind. Sometimes bumpy, but the galley was still workable.

Late afternoon a gusty cold front passed through, but nothing exceptional.

Our friend Ray kept a diary with very nice pencil sketches. Good way to keep memories. It was his first offshore trip.

Tonight no moon, yet, and a clear starry sky. Looks fabulous. Even the Milky Way is recognizable.

Rainy, squally, variable winds from a lot to nothing. Earlier morning started one engine to keep the heading. Later quietly sailing again. Looking eagerly forward to the first Caribbean drink in the marina bar

Docking was ‘substandard’ for the Horn crew. Boat didn’t touch any pilings or the dock, but it was chaotic. We were probably a little too tired to function in a coordinated fashion.

887nm over ground with a 14989nm total for LUNARA. We are close to the 15000nm mark! This trip, we averaged 6kts with very little engine time except for docking here and leaving Cape Charles. We used our small stay sail and the second reef for most of the first 5 days and then switched to the Gennaker combined with the full mainsail.

What’s next? Some Boat TLC in the marina and touring Eleuthera then heading over to the Exumas. Yesterday, I changed oil on both engines and the generator. Exhausting work in the heat. The engines need to be hot to siphon the oil out. Working in the engine room with 50ºC required pours of cold water over my head from the stern shower to keep working. 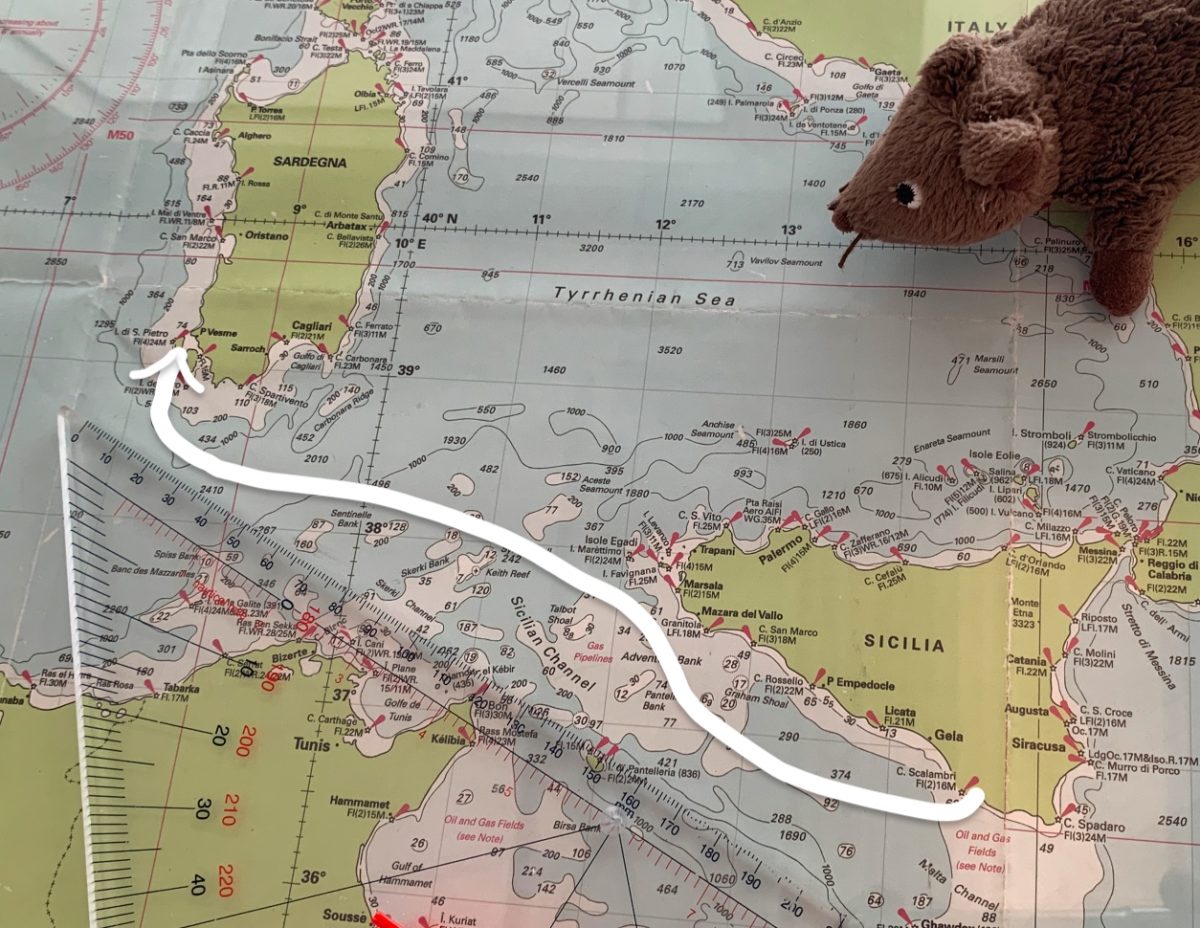 July 10 to 13, 2021 In April we got the chance for a Covid-19 vaccination here in Sicily. It was quite a surprise during breakfast on a Sunday morning. There

We had stopovers in Spain on our way to Italy. Hence, our need for a COVID test. Since Monday we eagerly waited and begged for this test in order to